On Fear and Fostering 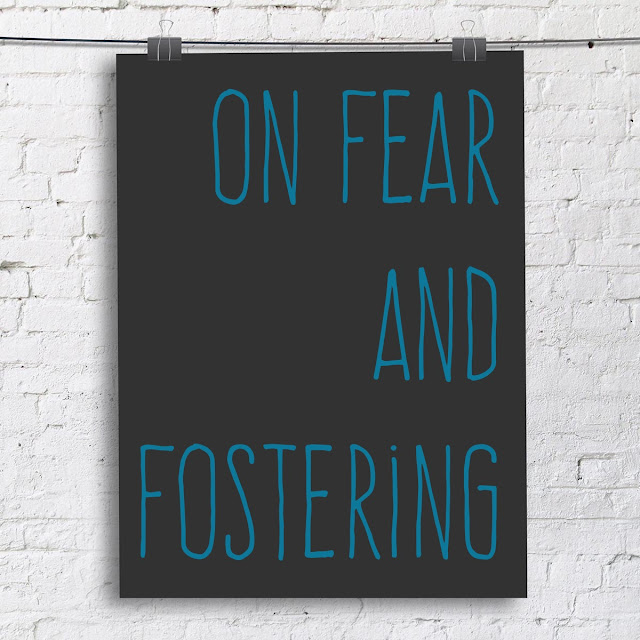 When I was young, I- like many children- had dreams of becoming an actress. I wanted to be on Broadway, which I think surprises a lot of people because I tend to be somewhat reserved and don’t have an especially magnetic personality. It’s fine- I can embrace this fact about myself. I have an awkwardness I like to believe is endearing, but charisma? Not so much. Nonetheless, an actress I wanted to be- so much so that I asked for an agent for birthdays and Christmases for years, which probably never annoyed my parents at all. There was something about inhabiting another person and living her story that I  loved.

It started in 8th grade with The Great Bear of Orange. The Great Bear of Orange was a brief, one-act show in which I slayed as the evil witch- a part I received because I was the only student willing to let go of my middle school inhibitions and self-consciousness long enough to do the classic witch voice during auditions. I cared about being a star more than I cared about fitting in. Or maybe I thought it would help me fit in? Either way, I still remember what a rush it was to perform in front of an audience- even one as apathetic as a room full of middle schoolers forced by their teachers to be there.

I had this great dramatic monologue I gave while standing alone on the stage, which felt like such a big deal to me.


To this day, I can remember some of it. “So Great Bear of Orange- you’ve managed to lure a fair maiden into your lair! You think you’re so crafty you can skin an eel?? I also will see she is well-cared for…” Unfortunately, the Great Bear messed up his lines and skipped over the entire thing during our only evening performance for parents and family. It was devastating, but I have found it in my heart to forgive and move on.

Anyway, the point is I loved acting. All of my free time in high school was split between theatre and youth group, and when I wasn’t doing either of those I was listening to Broadway soundtracks or performing them in the shower. (I’m sure you are already picking up on this, but I was obviously very cool and popular.) By my senior year, I decided I’d go to college to study musical theatre- every parents’ dream for their child. I auditioned (and was accepted, nbd) to programs at a few universities and ultimately decided to attend Baylor. (Sic ‘em!) But as high school drew to a close, I started to realize that my dream of Broadway was big. And hella risky.

And that terrified me.
It was right around that time that a small, fearful voice packed its bags and moved in with me, settling down and taking up more and more space (as we all do when we live somewhere for a while), growing and expanding until it became this loud, booming sound I couldn't really block out.


So I spent a lot of time listening to it. Fear told me all too often that I probably wasn't enough for that dream of mine, and it's easy to believe anything you're told so confidently and consistently. I started questioning whether I was pretty enough or had a good enough voice, I started over-analyzing every part I didn’t get, and suddenly I was unsure if I had any talent at all. (You’d think being accepted into theatre programs would have quieted the fear, but it didn’t- that’s how quickly it grew and took over.) I showed up to college so afraid  and certain of my own failure that, during the first week of classes, I sat in my dorm room late at night and changed my major as I cried over my keyboard. (To elementary education, which also did not work out, but for very different reasons.)

As sad as that moment in my life was, I am not sorry it happened. (Although, real talk, I do feel a little sad when I see a show and wonder if it could be me onstage.) If I hadn’t made that decision then, my life would probably look very different now- and I am pretty happy with the life I have going on. Mom to the cutest 2 year old in the world? I think that surpasses all the Tony’s I would clearly have won by this point.

I’m not sharing this story to bum anyone out- or to casually inform any potential readers about my hidden talent. (Unless anyone reading this is a casting director looking for an inexperienced actress for a new hit musical. If that’s the case, call me.) I bring it up because, over the last two and a half years, a lot of people have heard my story and generously referred to me as “brave.” It always makes me laugh a bit, because, in all honesty, I have never in my life considered myself to be a brave person. When I was young, my dad made me practice looking him in the eyes while I recited the alphabet because just talking to people made me nervous.

The truth is, I’ve spent a lot of my life being afraid. And on far too many occasions I’ve allowed fear to make decisions for me. (And some of them have been big, important decisions.)

It's hard to look back on those moments, but these days I feel differently about myself. The Kaley of right now could look anybody in the eyes and confidently say, “I am very, very brave.” I think that’s partially because age and experience have a tendency to give us a new understanding of who we are, but mostly I think it’s because being a foster parent- especially this time around with two older and challenging boys- has given me a new understanding of what bravery is. As Nelson Mandela said, “I learned that courage was not the absence of fear, but the triumph over it. The brave man is not he who does not feel afraid, but he who conquers that fear.”

For anyone who looks at me and sees any level of courage or thinks they could never do what I'm doing, I want to make something very clear: I am, quite often, terrified of this journey I’m on. There are times I feel afraid I’m not making the right parenting choices, times I fear I won’t make the right parenting choices ten years down the road, times I worry I’ll never achieve financial stability (I’m a single parent/social worker- dream combo), times I fear my decision to foster/adopt will doom me to permanent spinsterhood (this fear is real from my spot in the Bible belt), times I fear how my decision to foster affects the people around me, times when I'm afraid my patience is about to run out completely, times I worry raising three boys will destroy my sanity, times when I go to bed so exhausted I fear I won’t be able to wake up and do this again the next day… This is list could go on for ages. Choosing to be a foster parent (and a parent in general) is just straight-up terrifying. There’s no getting around it.

That's the point I reached in 2014, when I decided to begin my journey as a foster parent. I knew it was something I wanted to do, but always said it would be down the road when I was older and settled down. Then I realized how significant the need was in my community. (If you want to hear more about that discovery, I talk about it in this episode of the Archibald Project's Podcast.)

In that moment (and in many moments throughout the licensing process) I was faced with two choices:  one that would give in to fear and be easy and safe and lead to me watching Netflix far too often; another that would embrace fear and be terrifying and vulnerable and (hopefully) allow me to make a positive impact on the world.

Fueled by passion and a strong sense of social justice, I decided to go with the second option, plowing forward to set up meetings with local agencies and begin the work to get licensed.

But soon afterward fear showed back up, and there were definitely times when I almost caved. One day I convinced myself I wasn't ready to be a foster mom, so I took a "break" from the licensure process that I initially intended to last forever. Or at least for 20 years.

I thought I would feel a sense of relief and peace after quitting, but I felt surprisingly unsettled. I spent time seeking counsel from family and friends, praying and trying to figure out what I should actually do. In that time of uncertainty, I realized something important:

I needed to make the decision- then and repeatedly for the rest of my life- to let the potential for good outweigh my fear.

I had to let the voice of hope, optimism and opportunity be louder. (Or at least choose to listen to it more than I listened to fear.)

That's not to say I don't allow fear to inform my decisions and actions. I’ve discovered it's an important thing to acknowledge because A) it’s a real feeling, and B) it helps me recognize what’s important. Listening to fear makes me very aware of what I value, as well as what my strengths and areas for growth are.

I refuse to let fear prevent me from living a rich and meaningful life spent doing big and crazy things that just might make a difference in the world.

Life is just too short- and far too important.

So please know as you read my blog or look at my photos or watch me on Fixer Upper- I am far from fearless. And that’s okay.

And it’s okay if you’re not fearless.

I mean, kudos to you if you are- I am in awe of you. But if you’re like me (as I suspect most people are), remember that your fear doesn’t need to define what you do or who you are. You can still choose courage- even when doing so feels scary and crazy and makes very little logical sense.

After all, sometimes those are the choices that change your life.
at January 11, 2017