"IT'S NOT ABOUT THE LAUNDRY!" 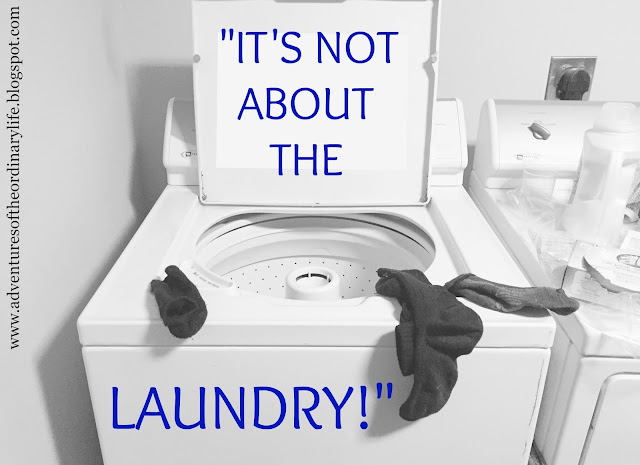 I started writing this post back in December and have debated since whether or not I actually want to post it. I wrote as a necessary reminder for myself, but doing so required me to be very honest about something I don't always love to admit publicly. As someone who is passionate about advocating for foster care and encouraging others to get involved, I love having the opportunity to highlight the Instagram-worthy parts of being a foster parent, and I could talk about how important and meaningful this work is all day.

But when it comes to the challenges? I like to keep it light. That's partially because I like looking like I have it all together, but mostly because I am aware that foster care intimidates a lot of people, and I worry that being too honest about the difficult moments might, in some people's minds, be a confirmation this path is one they should avoid.

At the same time, I don't want to mislead anyone into thinking this is an easy road once you muster up the courage to take those first steps.

Because the truth is: sometimes being a foster parent is incredibly difficult.

The past few months have been hard. Like- ready to quit because I’m just so exhausted and overwhelmed hard.

T1 and T2 are remarkable kids- they are resilient and caring and sensitive and funny. And they are also punks, for lack of a better term. There are probably numerous reasons for this fact- some revolving around their life experiences and some revolving around their life stage. But caring for them has challenged me in both expected and unexpected ways, and- to be very honest- there have been times when I’ve felt ready to throw in the towel. I’ve been yelled at and threatened, laughed at and mocked, and just disrespected in general. And it is really, really f****** hard and frustrating and exhausting. (The “f” word seems to be one of the few words that do it justice, but I know not everyone loves its use. I generally don’t, but I have found it an accurate articulation of my feelings lately.)

I am not always able to think clearly or respond with patience and grace in those tense moments of frustration and exhaustion. I haven’t done the math, but I think recently the percentage of times I've handled them well has been pretty low. Truth be told, I have dropped the “s” word twice in front of them, which feels a little embarrassing in retrospect- although I know they have heard (and said) much worse. I’ve been pushed to the point of tears on multiple occasions now, and I regularly have to follow Daniel Tiger's advice to take a deep breath and count to four. Or a million. (It's a little song from the show that J-Bear is starting to learn, which is really adorable. That's neither here nor there, but maybe I'll share a video sometime.)

When I am able to calm down enough to think clearly, which sometimes takes a while, I remember a conversation I had with T1 not long after he joined our family. We were getting ready for school/work one morning, unsurprisingly running behind schedule, when he- clearly frustrated- yelled to me from his room, “MS. KALEY- WHERE’S MY WHITE POLO SHIRT?!”

Me: “I’m not sure- have you checked your closet?”
T1: “YES! IT’S NOT THERE! IS IT IN YOUR ROOM?”
Me: “Honey, I do your laundry separately to avoid mixing our clothes up.” (This was an important lesson I learned the week before, when he couldn’t find the socks he wanted.) “I did your laundry two days ago, so it has to be somewhere in your room. Is it in the dirty clothes?”
T1: “NO, I ALREADY CHECKED THERE!”
Me: “Well, you’re welcome to check the laundry room- and I’ll skim my room, but I can pretty much guarantee it’s not in here!”

After this exchange, he stomped through the house to the laundry room to rummage around and, as I suspected, did not find his white polo shirt. He returned to his room, continuing to stomp and mumbling about how someone probably stole it or buried somewhere in my laundry. I checked my laundry basket (which essentially functions as a closet at this point because it holds all the clean clothes I’m too lazy/tired to put away). No dice. When I informed him it wasn't in there, I heard his door slam in response. Not long afterward, it was (past) time to go, so I announced we needed to leave the house in the next few minutes while attempting to pull J-Bear’s jacket over his squirming arms (because, oh yeah, I’m also trying to get a toddler ready through all of this). One arm into that process, T1, threw open his door and marched out of the house and toward the car without a word. He hadn't quite reached the doorknob, though, when I noticed something out of the corner of my eye...

You probably guessed it- he was wearing the missing white polo. I muttered a quick prayer of thanksgiving that my assumption about the shirt’s location was accurate and carried J-Bear to the car.

Cut to a few minutes later. We are now driving to T’s school in silence. He’s staring- or perhaps more accurately glaring- out the window, refusing to look at me. I wait for a bit and muster up some empathy (after all, I experienced similar frustrations as a teenager with a chronically chaotic room- sorry, mom!) before saying, “Hey, T, I know this morning was stressful. It must have been frustrating not being able to find your shirt when you wanted it. Maybe after school today, we can brainstorm some ways for us to stay more organized with your laundry so we can avoid that stress in the-”

“It’s not about the laundry!” he interjected sharply.

The silence returned as his words sunk in.

Because of course it’s not about the laundry!

Sure, that may have been what he was responding to in the moment. But what’s really going on is that this kid is living with a strange white lady and her son, missing his family, worried about his siblings, devastated over missing his brother’s birthday, confused by how quickly his entire world shifted, frustrated by how little control he has over anything happening to him, and scared of the uncertainty of his family’s future.

He’s not mad about his shirt.

He’s terrified by everything going on in his life.

As a foster mom of older boys, I have found myself so frequently losing patience because I am horribly short-sighted. And often selfish. That's not me being modest or seeking reassurance those things aren’t true, because I promise you- they really, really are. (I am a human, after all.)

When I’m dealing with another temper tantrum or mood swing or the millionth repetition of a basic instruction like “brush your teeth,” it’s easy for me to focus on how hard this is for me- how frustrating it can be to deal with remarkably disorganized rooms (I totally get it now, mom), having to pick up wet towels from the floor for somehow the 10th time this week even though it’s only Tuesday, short tempers, insubordination, and blatant disrespect feebly disguised as “just a joke!”. It is hard for me to realize I’m not the only person struggling with this change.

I know enough about childhood trauma to know not to expect this, but deep down I want these boys to walk into my home and immediately understand/adapt to my habits, my personal preferences, my rules and expectations, my family culture, etc. But that’s not very realistic. And it’s certainly not empathetic or fair. Because, the truth is, they're adapting to and dealing with a lot. They've spent their entire lives in a different home where things likely look very different, and I can't really expect them to navigate all of these changes with ease.

That being said, I am clear with them that there is no excuse to be disrespectful. I set high expectations for them, and I remind them at every opportunity of the gifts, strength and potential they have.

But I'm still working on the grace part.

I'm not sure I'll ever fully get there- because being disrespected just sucks. But I want to try to be more aware of what's really going on- what's happening behind the meltdown over the laundry.

And as I reflect on how important that is for my life with these boys, I realize it doesn't end there. I want to practice seeing deeper and extending more grace to everyone- even the driver who honks at me for driving the speed limit while cutting me off in a school zone.

I often see people simply through how their actions affect me.
Instead, I want to see them as people who are doing the really hard work of being human. (Because let's be honest- sometimes being a person is rough.)

There's a quote I love that is often accredited to Plato but may have actually been adapted from something Ian Macalaren wrote (thanks, Google!):
I so often need this reminder- in my home and life in general.

Or this one, from Kid President: 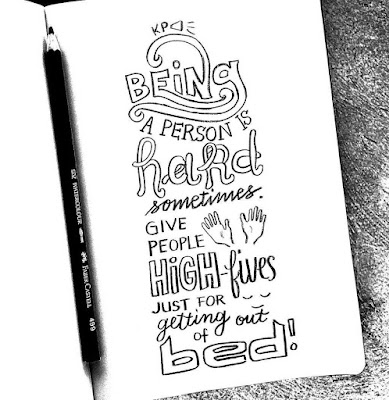 Now this isn't to say I will simply accept meanness and overlook disrespect. That behavior isn’t acceptable and needs to be acknowledged and addressed.

But I will work on looking through the behavior to see the person behind it, so compassion- rather than anger/exhaustion/frustration/etc- will inform my response.

I don’t know what’s in store for me and T1 and T2. There’s a lot we’re trying to figure out in order to ensure they’re being loved and cared for as fully as possible. I hope that can happen in my home. But no matter what lies ahead, I always want to remember:

It’s not about the laundry.

**Just in case anyone is interested, one book that has really informed my understanding of child development and behavior is The Whole-Brain Child. If you have, work with, or know children- I highly recommend it. I wish I were being paid to promote it, but I’m not- it’s just genuine praise for this book. The authors have written other books that I have purchased and am working on reading in my incredibly limited free time, but I bet they're great, too.**