My Letter to Ellen

Last weekend I survived the most challenging day of single parenthood I have experienced to date.
It started like most days- Little Man was fussing a little bit around 4AM, so I went in there to help him calm down. A few minutes later, I was walking back to my room when I realized something was not quite right. My stomach felt a bit off, but I thought I might be able to sleep it off, so I crawled back into bed and rolled around restlessly for a while.
Thirty minutes later, Little Man woke up again- this time to eat. I picked him up, walked to the kitchen to grab his bottle, and knew it was only a matter of minutes.
It's always odd to me how accurately we can sense our impending fate when we experience that type of nausea. I go years without getting sick- at least this kind of sick- but even so, I can instantly tell when my nausea is not just nausea.
I did my best to breathe slowly as he sucked down his bottle, laid him back in his crib as quickly as I could, and then booked it to the bathroom- where whatever stomach virus I had hit in full force. (Can you tell I'm trying not to be too graphic?)
When Little Man woke up a few hours later, I managed to pull him out of his crib and lay him on his play mat before laying down next to him- a safe distance away. Being the super baby he is, he played contentedly for an hour or so (seriously- he's the best baby) while I tried not to move.
To say it was miserable would be an incredible understatement. But- once again- I was saved my the kindness of friends. One friend saved the day and coordinated people to come help me. Those people came and played with/cared for Little Man while I tried to sleep. Another friend brought a miraculous anti-nausea medicine. Others brought ginger ale and very light foods. One friend even spent the night to help with J's nighttime feedings.
By the next morning, I was pretty much back to normal- hallelujah. But, man... I really am not sure I would have made it without those kind, wonderful people. They truly saved the day.
So thank you to all of those who came to our rescue last weekend. I really am #blessed.

Now, on to the subject of this blog post.

A while back, I was talking to my sister about foster motherhood, and I joked that I was going to write a letter to Ellen (whom I adore) suggesting she change her Mother's Day show this year.

For anyone who isn't a fan of Ellen, 1) you're crazy, 2) she hosts a Mother's Day show every year where first-time moms-to-be fill the audience. It's awesome. I mean, look at all these baby bumps: 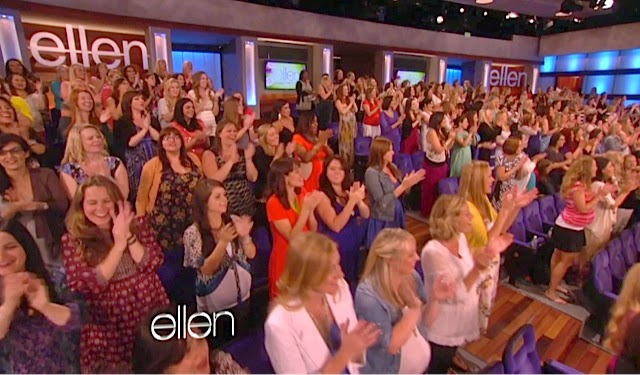 As I laughed at my idea, my sister excitedly encouraged me to "do it!" A few other friends gave me the same feedback when I mentioned it to them, so I decided to go for it. I mean, what did I have to lose?
I sat down, wrote a lovely letter, and then went to Ellen's website to figure out how to send it.
It was then that I discovered that the only way to write to Ellen is by typing it into a box on her website (as opposed to sending a hand-written note or attaching a Word document). I also realized that the box had a strict character limit- one that was far below what I used on my letter.
I cut it down as best as I could, but doing so forced me to leave a lot of the heart behind my suggestion out.
It seems like a waste to just delete the full-length version, so I figured I'd post it here.
That way, if anyone who sees this knows Ellen, they can make sure she reads it. If I'm only seven degrees away from Kevin Bacon, I can't be more than 5 degrees away from Ellen. She interacts with a lot of people and is just the best- surely we have some friends in common.

So, anyway, here's the unabridged letter:

*Source: The AFCARS Reports No. 20: http://www.acf.hhs.gov/sites/default/files/cb/afcarsreport20.pdf