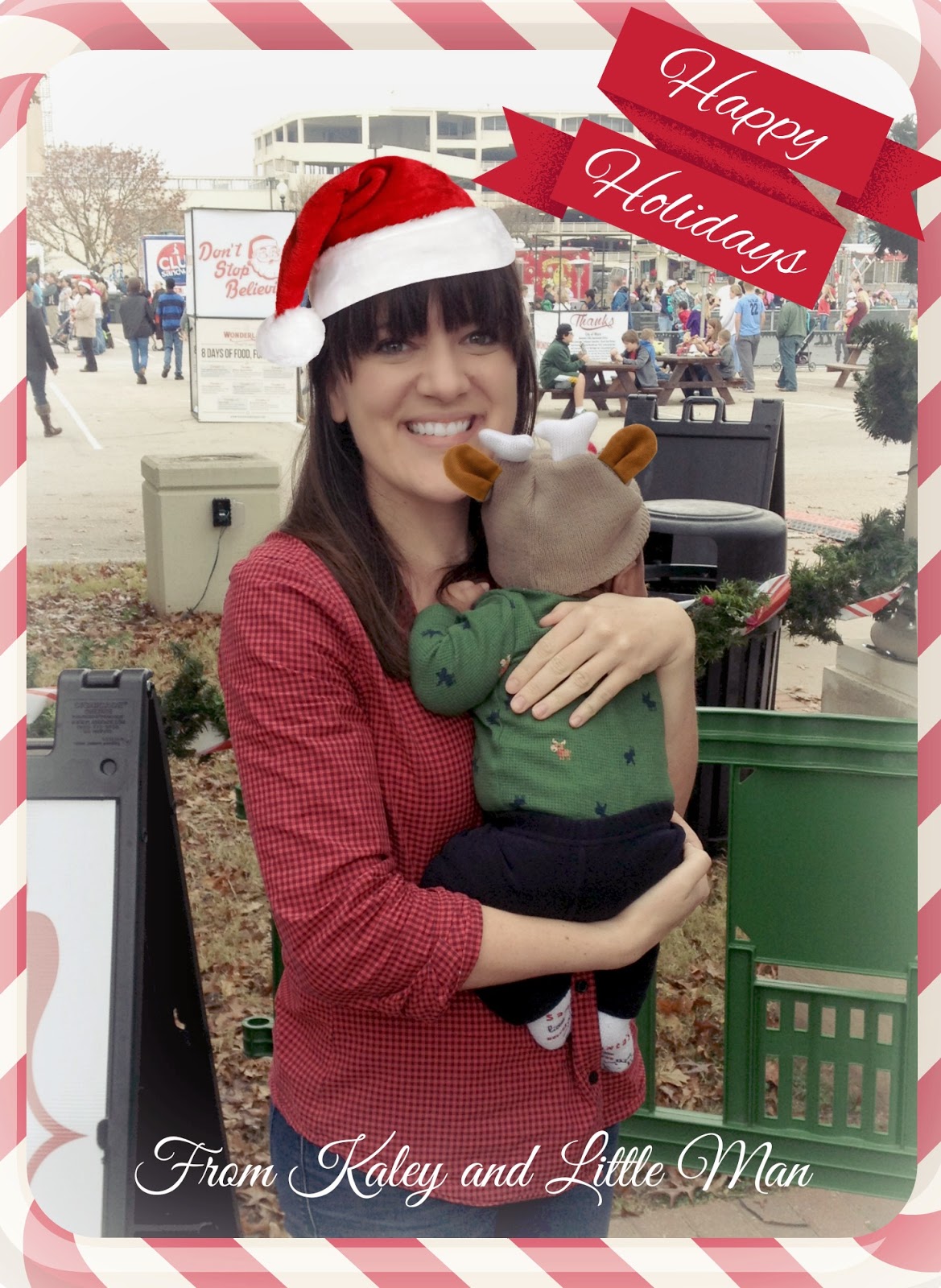 Happy holidays from me and Little Man!

It probably seems as if I've forgotten about this corner of the internet- it's been over two months since my last post.

I've actually started to write a handful of blog posts in the past several weeks, but- each time- have been sidetracked by a fountain of spit-up, a stinky diaper, the most pitiful cries of hunger (/sleepiness/boredom/any other thing babies cry about), or (on my end) a bout of narcolepsy. But, thanks to the holiday break, I've finally had enough time to write (and finish) an update!

A lot has happened over the past two months. Little Man has started smiling, laughing, cooing, and pulling my hair like a champ. We've celebrated three first holidays and survived one first trip to the ER! (Little Man, along with every child within a 50 mile radius of our home it seems, came down with RSV. Booooo.)


He has also grown a lot. He's developed some serious rolls on his arms and legs and has gone up two diaper sizes. I'm convinced all of this growing happens from 3-6AM- the last stretch of sleep I get each night. I look at him in the morning, and I swear he's bigger than he was when I fed him at 2AM. These days he gives me the most heart-melting smiles when he sees me after waking up, but I suspect it's his way of distracting me from the fact that he gained an extra quarter pound of weight overnight. Carrying him around these days is no joke, guys.

On Christmas Eve, Little Man turned three months old- which amazes me. The time has flown by, and it's been incredible to watch him change and grow. I do miss the newborn days of constant snuggles, but it's so much fun to see him laughing and playing now.

I've definitely discovered that traveling is easier in those early days, though. Flying, specifically. We went to Portland for a wedding when he was two weeks old, and- despite my anxiety- he handled it like a true jet-setter.

Last week we flew to New York to celebrate the holidays, and it did not go quite so smoothly. Our first flight from Waco was filled with a lot of tears from him, and our brief layover was filled with a few more tears from me. (I was stressed, and there was a particular DFW employee who was not very empathetic.) I am not kidding when I say I strongly considered just taking a shuttle back to Waco at that point.

Thankfully, the second flight was a lot easier, and I was fortunate enough to sit by a father of three who was very understanding and helpful. He even offered to buy me lunch, which was so kind and generous! (This man recently started a company called "Golden Coast Mead," so if you like such beverages, support them- he is one of the nicest people and totally deserves it.)

Being up in NYC has been great- it's been nice to be with family. It's also allowed me to nap more, for which I am very thankful- particularly because he is not sleeping as well as he normally does. He's just too scared to miss anything going on in the Big Apple, I guess.

I'd say he enjoyed his first Christmas, but, honestly, he seemed pretty indifferent to the whole thing. He is only three months old, after all. He got a few toys he's not quite sure what to do with yet, but hopefully he'll appreciate them more within the next few weeks.

We're up here for a just a few more days before heading back to Texas on the 1st. (Please keep us in your thoughts and prayers then- I'm not sure I can handle the stress of last week's flight again...) Most of our plans involve staying cozy and warm in the apartment, but I'm sure we'll take another walk in Central Park- and hopefully one to a nearby bakery that I love.

I'm excited to to see what 2015 holds for me and Little Man. One year ago, I never would have guessed I'd be sitting here now as a foster mom to such a precious little boy. I had dreams of becoming a foster parent, but I didn't know at the time how soon it would happen. It's strange to think about how much my life has changed- and how much it could change in the weeks ahead- but I wouldn't trade it for anything.

It's been an amazing year- and an incredible journey. Thank you so much for sharing it with me! I cannot say enough how blessed I feel to have such incredible support from so many people near and far; the little guy and I are very lucky.

We hope you've had a wonderful holiday season, and, as we enter into 2015, we pray you have a year filled with peace, joy, love, and hope!

I cannot end this post- and begin the new year- with anything better than this sloth's advice. May we all keep it in our hearts throughout 2015: